A Brief Musical Overview Of Pukkelpop 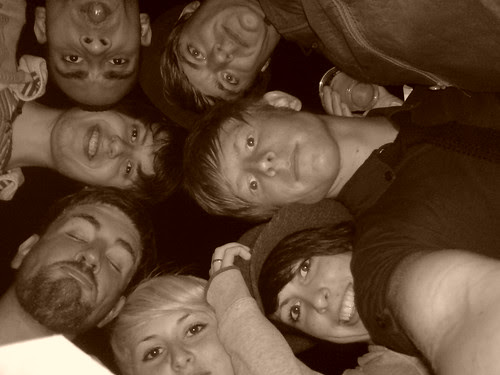 Back from Belgium's Pukkelpop festival. It was certainly better than I was expecting and fulfilled many of my musical fantasies. The following is a very brief musical overview of Pukkelpop. I will get my camera film developed in time and post my festival in pictures in due course.


Lo-Fi-FNK kicked it off, after two years waiting to see them, my moment finally came, enjoyable electropop fun, just need to work on their dance moves (hypocrisy)

Liars were considerably less scary and infinitely more accomplished than when I last saw them a couple years ago, probably the most interesting live act of the weekend.


Liars - Plaster Casts Of Everything

Battles were incredible too, my appreciation for drummers increased as a result of seeing them in action, relentless, monotonous, monumental.


The rest of the day was spent drinking cherry beer (possibly to the point of all 13 of us falling into the stereotypical British holidaymaker role) Then we danced to the head honchos of Kitsune - Gildas & Masaya, then Riton, Boys Noize (nuts) and Tiga.


Slept or tried to, not that pro-plus lets you sleep, just shake uncontrollably. Roused myself for Uffie & Feadz, then MSTRKRFT who dropped something I was totally expecting.

More cherry beer at the cost of James Holden and Apparat :( WHAT AN ERROR.


Early start for Home Video, who impressed me a lot, reminded in part of Radiohead, see for yourself.

I was staggered at how rammed Booka Shade was, I guess I underestimated their popularity, then again we were in minimal mecca I guess. Mindblowing.


I was pressganged into seeing Kings Of Leon as opposed to Trentemoller, ho hum, at least I had cherry beer. Then I caught some of CocoRosie, pretty darned nice...


Justice did not disappoint, I chose to be cool and wear my EdRec tee on the first day whereas some kiddiewinkles chose to stand at the front and wave their tee's. Us? We danced with rhythmic convulsions and reckless abandon.

Erol Erol Erol, why do you treat us like this, just when I was about to collapse he put on the most re-energising song ever (past 6months) the new Modeselektor pulveriser. It was perhaps the aural pinaccle of the weekend.


So yeah, that was roughly what I heard.

To recover, I have fancied some Motoro Faam, wonderfully crafted, organic sounding experimental electronica from three 23-year old Japanese guys. Get it HERE.

Anonymous said…
which is you in the picture laighton, i'm absolutly dieing to know who you are! until you tell me i will be, like you.
12:51 am

Anonymous said…
did MSTRKRFT play the JFK re-edit of airbus? or the original?
4:46 pm

Leighton said…
Me? I am the bearded one pulling a face. Who might you be A.Non?

Josh, I am jealous. You get to see YACHT and Muscles =( Have fun!

You know i'm not too sure, the JFK edit sounds pretty similar and when it's only played out for a minute or two in a set it's hard to distinguish, but with it being Jesse on the wheels of steel i'd imagine he'd play his own edit.
2:41 pm

Wes said…
hahahaha now I see that picture I recognize you guys, that girl was pushing forward at every gig! annoying..and I also remember the blond guy wearing a white/red shirt..don't know who that is!
anyway..Pukkelpop was great.
1:29 pm

Anonymous said…
great post. one of the best blogs out there.
2:23 pm

Unknown said…
did you do DOUR this year? that was also another great belgin festivaal.
10:13 am

Leighton said…
I missed DOUR, heard nothing but good things about it, apart from some slight organizational hitches?!

Definitely up for going next year though, funds permitting!!